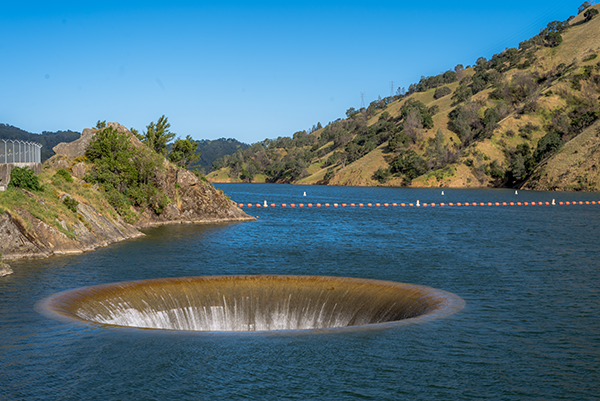 The spillway at Lake Berryessa in Napa County is known as the “Glory Hole” by locals. Photo: Mike Fusaro / Adobe Stock

NAPA COUNTY – A recent series of storms has left much of Northern California with more water than it can handle. The “Glory Hole” at Lake Berryessa is the spillway used to drain the lake’s excess water at the Monticello Dam. Atlas Obscura has deemed it “the largest drain in the hole world.”

The spillway has been active since last Tuesday, following days of heavy rain in the region. In the last week, spectators from near and far have traveled to Monticello Dam to see and hear the giant drain in action for themselves.

This week a video posted on Facebook shows a not-so-lucky ducky floating toward and then disappearing down the famous drain. It is unclear if the duck survived the 200-foot plunge to Putah Creek.

The dam is located on the east side of Lake Berryessa along Highway 128, just 9 miles west of Winters. The area is popular with boaters and hikers in the summer months.