Sallie Fox: The Story of a Pioneer Girl

Sallie Fox: The Story of a Pioneer Girl 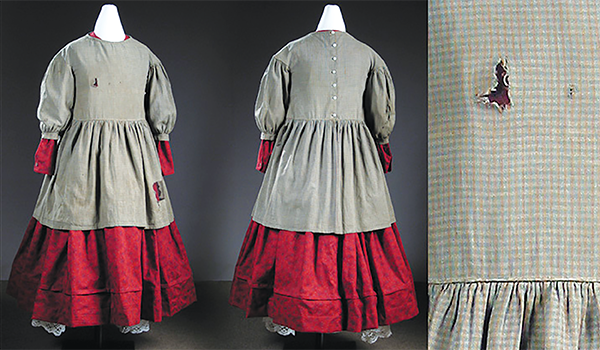 Hand-sewn child’s apron, worn by 12-year old Sallie Fox during her trek to California from Iowa. On August 30, 1858, Sallie was wounded by an arrow during a Mojave Indian attack (right). Photo: VisitVacaville.com

At only 12 years old, Sallie Fox trekked across the country from Iowa to California in a wagon train with her parents, sister and three step-siblings after hearing tales of a luscious climate, lucky fortune and beautiful scenery in the West. Along with their neighbor Leonard Rose, the large family formed the Rose—Baley Party and embarked on a rough journey that lasted longer than eight months.

The group safely traveled 1,000 miles to New Mexico, but when the emigrants were preparing to cross California via the Colorado River, they were unexpectedly attacked by Mojave Indians. Fearful for their lives, a battle ensued, which killed Sallie’s stepfather and left an arrow in her side, severely wounding the young girl, leaving her vulnerable to diseases, fatigue and hunger.

Surviving members abandoned all but two of their wagons and circled back to New Mexico, traveling 500 miles with limited resources. They merged with pioneer Edward Smith’s party in present-day Arizona, where they refueled on supplies, wagons and support.

In January of 1859, the group of emigrants took their remaining livestock and headed to California. When they finally succeeded in the long journey, Sallie’s uncle took the tired and exhausted family from Los Angeles to Vacaville. Sallie grew up in Northern California, becoming an elementary school teacher and receiving her State Educational Diploma in 1869. She taught at the Union Grammar School in San Francisco before revisiting her old home in Iowa, speaking to young children about her arduous journey. She married and had three children before passing away in a Napa nursing home in 1913.

The Rose—Baley Party was the first European-American emigrant wagon train to arrive in California on the Beale’s Wagon Road, established by military officer Edward Fitzgerald Beale in the 1800s. Sallie’s long but successful journey at her young age is a testament to her story and how adversity can be overcome through courage, family and determination. The dress that she wore during the attack in 1858, symbolizing this journey, is currently displayed at the Vacaville Museum.