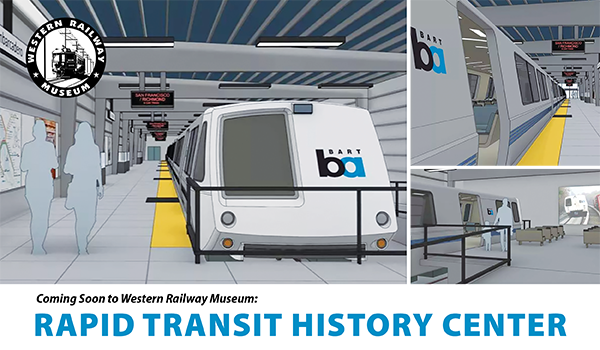 When the population was booming in the Bay Area in the late 19th century, the need for an efficient commuter system was made clear. As commuter traffic increased, the BART train service was finally inaugurated. Soon, you can learn about the beginnings and the history of the Bay Area’s favorite rapid transit system at the Western Railway Museum’s new exhibit!

Conquering the natural boundary of the San Francisco Bay by ferryboat gave way to trains on the Bay Bridge as a more productive way of bringing commuters back and forth. Discover early concepts and engineering challenges faced by BART’s designers as they worked to develop a modern Space Age transit system. Learn about the design and construction of the Transbay Tube, a concept that now makes it even easier to get from one side of the Bay to the other.

Experiencing over 10,000 earthquakes each year, it’s imperative that any California transit system is resilient enough to keep its patrons safe while the ground is shaking. At the Museum, appreciate how BART railways and the Berkeley Hills Tunnel were constructed to coexist with the dangerous Hayward Fault.

The Museum has several concepts under consideration as to which original BART Legacy Fleet cars will be displayed. Take in the rich history with which these cars have strong ties, including U.S. presidents, Hollywood films and other historical events.

The Museum has a GoFundMe account whereby you can make a contribution to offset the costs associated with opening the new Rapid Transit History Center.