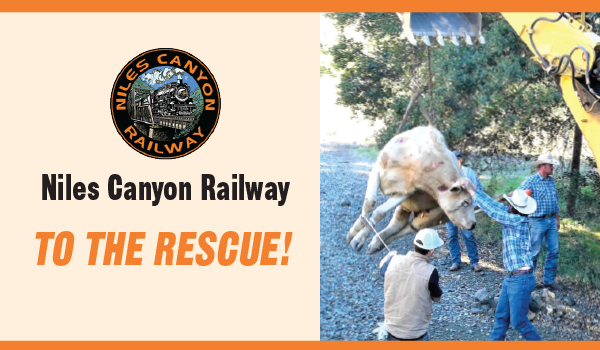 Niles Canyon Railway volunteers used a railroad backhoe to rescue a stranded cow who had slid down a steep hill and gotten lodged between some rocks.

The folks at Niles Canyon Railway miss operating the scenic railroad for their loyal fans but are certainly keeping busy maintaining the trains and track…and even taking care of local livestock!

Sometimes you just find yourself at the right place at the right time. That’s exactly what happened to two Niles Canyon Railway volunteers who were cleaning up the aftermath of a fallen oak tree. That was when they came upon a two-year-old cow stranded on the railroad right-of-way, a mere 15 feet from the tracks. It had become lodged between two rocks after sliding down a steep hill and under a barbed-wire fence. While the captive cattle was alive, alert and mostly uninjured, it could not get itself upright. 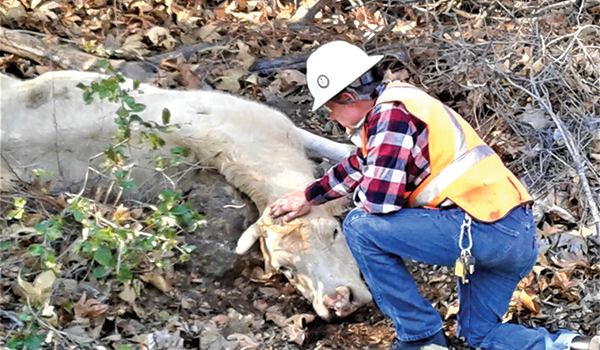 Luckily, the owner was identified and contacted by the volunteers. The ranch foreman arrived to assess the situation. It was clear that there was no easy solution to this problem.

As luck would have it, the railroad’s general manager and professional heavy equipment operator Stephen Barkkarie was available. He rode to the rescue on the railroad’s Caterpillar backhoe that is specially equipped to travel on railroad tracks. The cattle owner and a crew of four cowboys arrived on the scene minutes later to offer their assistance.

The ranch hands threaded a pair of soft nylon slings under the cow and attached them to the backhoe’s bucket. The cow was then gently lifted and placed onto a maintenance “push car” before beginning a quarter-mile journey towards an awaiting trailer. 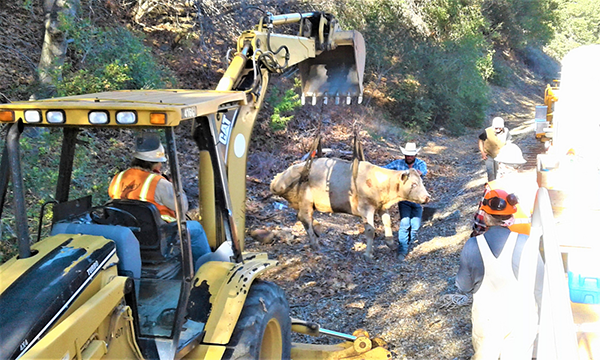 To reach their destination, they would need to pass through a neighboring property and its locked gate. The rescue team’s streak of luck continued, as the property owner happened to be nearby at the time and was able to permit access, allowing the rescue effort to end in success.

The good news doesn’t stop there: the cow was not severely injured and will make a full recovery. She is expected to be nursing calves of her own in the late spring.

This happy ending is an excellent example of how teamwork and neighbors helping one another is more important than ever, even during this time of social distancing and quarantines. It’s heartwarming to know that when push comes to shove, there are those who are willing to give you a lift!

Read about the rescue operation in detail on the Niles Canyon Railway blog.

Niles Canyon Railway is a living history museum. The railway’s ever-popular train rides are expected to resume as soon as health regulations allow. Visit NCRY.org for the latest information.