Your Town Monthly Goes to Vancouver

Your Town Monthly Goes to Vancouver 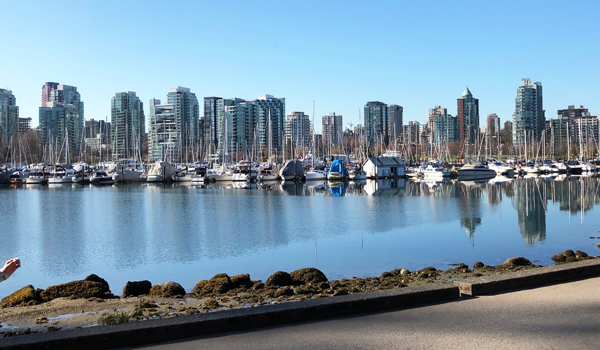 Make sure your passport is updated because you’ll want to plan a trip to beautiful Vancouver, British Columbia on the western coast of Canada. We originally opted for a visit to Vancouver to attend an NHL hockey game at Rogers Arena. However, the more we delved into activities to do while we were there, the more the whole “attend a hockey game” plan became just an added bonus. It’s important to know that Vancouver is a cruise ship port, and during “cruising season” (May through late Sept/Oct), the city can be quite busy. Our timing at the end of March couldn’t have been more perfect, as flights were inexpensive, weather was moderate and the city hadn’t seen its influx of visitors yet.

Our relatively short flight from the Bay Area put us in Vancouver around 3pm. We stayed at the quaint Hotel Blu, a boutique hotel located in the heart of downtown Vancouver. The city itself is fairly small and mostly walkable from any point. For those wanting to Uber from point A to point B, know that ridesharing companies do not exist there—only taxis. 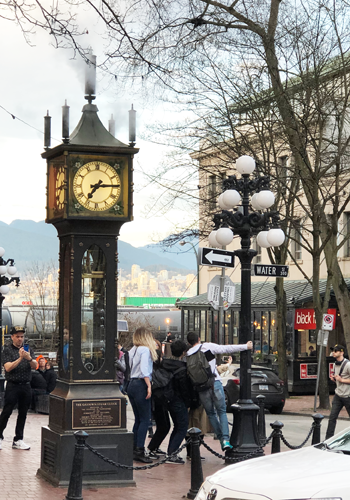 Vancouver’s Gastown district features a steam-powered clock that shoots off steam and whistles every hour.

Our 5-day itinerary was nothing short of spectacular. Once we settled in, we decided to visit Gastown, Vancouver’s oldest neighborhood known for its cobblestone streets, chic cocktail lounges, restaurants and a steam-powered clock that shoots off steam and whistles every hour on the hour. We ventured to a vegan restaurant called Meet, located in an old historic brick building. The place was bustling with locals and tourists alike, enjoying favorites like sweet-chili cauliflower wings, veggie burgers and even the traditional poutine–veganized!

We got an early start the next morning to check out Stanley Park, a beautiful forested area with a seawall that boasts over 5.5 miles of walking and cycling trails, wildlife viewing and activities for all. We rented bikes at the nearby Spokes bicycle rental and started out. The sights are breathtaking, with exquisite waterfront scapes and scenic views, so you’ll want to make sure you take a minute or two to stop and look up. As we did, we were treated to two bald eagles watching us from above.

Our next stop was Granville Island, a shopping mecca great for getting a souvenir, a bite to eat or just to people watch.

Not sure where to start in Vancouver? Try the HOHO (hop on, hop off) bus. Simply board at any of the stops for a flat fee and get off at any site that interests you. We elected to get off at Canada Place where we enjoyed a lovely brunch waterside and then a walk over to the Olympic Cauldron, where the massive Olympic torch was built for the 2010 Winter Olympics. We hopped back on the bus and took it through Stanley Park, only this time we saw the “inside” of the park with its historic buildings, beautiful gardens and totem poles.

There’s really no need to rent a car in Vancouver unless you want to venture out further than city limits. Surrounded by stunning mountain scenery and magnificent views, we did just that and drove north on the Sea to Sky highway. We set out early on a Monday and headed 15 minutes north where we stopped at the Capilano Suspension Bridge. Originally built in 1889 with hemp rope and cedar planks, it was rebuilt in 1956 to become what it is today. A walk across is definitely not for the faint of heart; not only is it wobbly, it’s about 229 feet above the Capilano River below.

We finished at Capilano and continued north toward Whistler on the scenic highway that literally takes you along the sea up to the mountains. If traveling any earlier in the year, you may need a vehicle equipped to travel snowy conditions. However, we encountered clear roads with hardly any snow on the ground except on the high peaks. Stopping and exploring along the way is a must. Two of our stops, Shannon and Brandywine Falls, were both worth the trip alone. There are trails at each location where you can hike and make a day of it, or simply take a 15-minute hike just to view the waterfalls. 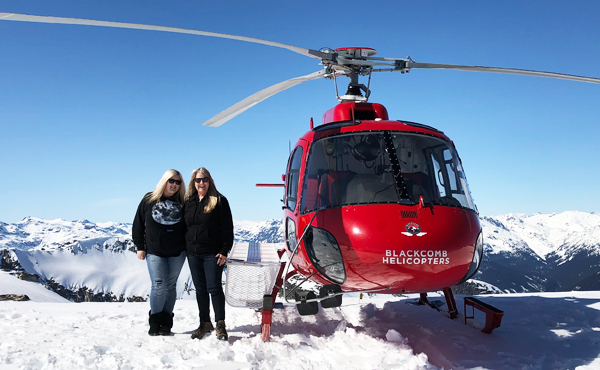 Here we are posing with our ride at the top of Rainbow Glacier.

The highlight of the day and the reason we drove up to Whistler was our plan to board a helicopter for a tour of the area. I can’t begin to tell you how exhilarating this was. Blackcomb Helicopters has some of the best rated and affordable tours available in the area. Our 1-hour tour took us over the Whistler ski area, massive glaciers and frozen lakes. Our pilot got so close that we were able to see mountain goat tracks on the peaks. Finally, landing on Rainbow Glacier (the helicopter’s landing skids have to be dug into the snow so that it doesn’t slide off), and then getting out of the aircraft to take in the view was a bucket list adventure for us for sure! I would highly recommend this tour to anyone visiting the area.

Since our visit was in spring, next on our agenda was a visit to the streets lined with Cherry Blossom trees. After pinpointing a spot (courtesy of the City of Vancouver’s Instagram), we dropped a point and set out. We apparently weren’t the only ones with this idea, as we approached we saw at least 30 other people capturing this gorgeous sight–and who could blame them? It looked like a beautiful pink, floral winter wonderland!

That evening we donned our teal “armor” and set out for our reason for visiting Vancouver: a hockey game (San Jose Sharks vs. Vancouver Canucks). We set out for some light bites at Fanny Bay Oyster Co., serving up some of the best oysters in the world, harvested right in the beautiful waters surrounding British Columbia. Afterward, we headed out to Rogers Arena which was a short 1/2-mile walk. Now, we’ve been to hockey games, but sitting on the glass is an experience in itself! The swishing and scraping of skates on ice, the whizzing by of the players and the occasional solid slam into the boards is definitely exhilarating. Unfortunately, the game didn’t end in our favor, but we had an experience nonetheless!

If you go: Spring is one of the best times to visit as the crowds are light (cruise ship season isn’t in full swing) and the weather is mild. Also notable is the exchange rate for Canadian currency is favorable when traveling north of the border.

Looking for more places to go? Check out our recent trips to Miami Beach and New York City.